Mac Rebennack – known the world over as Dr. John died at dawn on June 6, 2019. For some of us, he was Dr John. The Night Tripper. For ALL of us he was the voice and face of New Orleans. 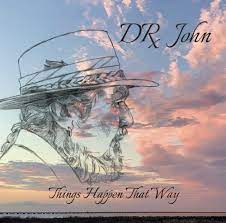 His latest (and last?) album Things Happen That Way, releases Friday.
And what an album. Guests include Willie Nelson,  Willies son Lucas Nelson and Promise of the Real. Aaron Neville.
Our interview guest is Ken Ehrlich who for over 40 years was the producer of the Grammy Awards. Mac had won 6 Grammys,  which is how they met and became friends.
When Mac died Ken was asked to write the liner notes and give the farewell speech at Mac’s celebration of life.
Mac Rebennack was a musical genius, a mentor,   a reformed addict, a Father, and husband. And such a character.  Which is why Dan Auerbach is shooting a documentary on Dr. John.

The complete dialogue – and it includes Ken reading some of his farewell speech for us – can be enjoyed on the Mulligan Stew Podcast.

MUSIC THIS WEEK FROM